Although the rest of the staff is exceptional Dr. Bowersox is not. He mis-handled my dog last week on a follow-up exam, and failed to correctly treat him. At the re-check, Bowersox tells me my dogs eye ulcer healed, he tells me i did a good job, his eyes look really good (thats do to round the clock care from myself and my family) but his eyes are not quite ready for surgery, you need maintance treatment for the next 3 months, he then reaches his hand out for my dogs lead, I though he wanted him closer to him to put drops in, but the next thing I know he is no longer standing in front of the rear door of the examining room, he is running down the hall with my dog, who obviously thinks its mom at the other end of the lead. I yell, and I mean yell, hey dont do that, this is not a good idea to do, and what does Bowersox do, he does not stop, he does not even stop at the end of the hall, there is a door at the end of the hall, you can see the kennels right in front of the door, he makes my Caleb go through the door full speed ahead and Caleb smashed his face into the side of the kennel and yelps. So I say what the heck did you do that for, dont harm him, he says I always put my patients through an obstacle course to see how blind they are. Within an hour Caleb is now squinting, I thought it might be from the floresant gel they put it, but through the night, its getting worse, in the morning, Caleb wont open the eye he smashed into, I take him back, this time to the New Castle location and see another eye doctor who tells me Caleb has a new cut on his eye, but different location from his healed ulcer. The she says Caleb has fluid in his cornea, that has to be removed in order to have surgery, didnt Bowersox prescribe sodium chloride and I say no, you mean Calebs eyes could be in better shape if he prescribed the proper treatment months ago, why didnt he, then, oh I got it, he wants more follow-up visits at $200.00 a pop to milk as much money possible from me and others at the expense of his patients. I finally got Bowersox on the phone, and he tells me I can do anything I want when examining my patients, and one of them is the obstacle course, you have no say in how I treat my patients, oh really idiot, its MY DOG, ITS MY MONEY PAYING YOU, YOU DID NOT HAVE PERMISSION TO TAKE MY DOG OUT OF THE EXAMINING ROOM, I WOULD NEVER HAVE GIVEN YOU PERMISSION TO PUT MY DOG THROUGH A OBSTACLE COURSE YOU MORON. YOU HAD NO RIGHT WHATSOEVER TO PUT MY DOG IN HARMS WAY. What else are you doing, not doing to your patients, you obviously dont care for their welfare or you would have properly treated my Caleb months ago. You have harmed my precious baby, and now you are just leaving him in mid-treatment after i spent thousands of dollars at this center, Bowersox will not fix what he did to my dog and has forbidden his other doctors from treating my Caleb. He does not want his other Doctors to know just has incompetent he is, and what he did to my Caleb. SHAME ON YOU BOWERSOX, YOU MONEY HUNGRY INCOMPETENT FOOL, YOUR SUPPOSE TO HEAL NOT HARM

We have a chocolate lab less than a year old, and being the wild pup he is, he got into stuff he shouldnt have. We noticed he started to feel sick and definitely wanted to take him into the emergency center. Before that, I called and the receptionist rudely answered the phone and I told her our situation and asked for some advice on what to do. She proceeded to speak down to me as if I was dumb and if I was bothering her. When it comes to pets and animals you are supposed to be compassionate, but thats the least of the problems that I had there. They then took an X-ray of our pup and we never even got to see or review them. They said they didnt see anything that could cause obstruction so they preferred to keep him over night and give him fluids. So before we left, they showed us an estimate with a high and low amount and that you had to make a 75% deposit before we left him. The next day they called to have him be picked up, and when we saw the invoice it was mind blowing. $1100.00 just to keep the dog over night and give him fluids? I understand you are running a business but thats outrageous, but there was nothing we could do at that point. So we brought him home, and he was all doped up on medicine and could barely keep his eyes open. He was still clearly sick and a couple days later this all started happening again. Since I have a friend that works at another vet hospital, I contacted her. I told her the situation and she said that veterinary specialty center of Delaware is REDICULOUSY expensive. We took him to my friends vet and the vet came in and actually examined my pup. He was compassionate and took the time to figure out the issue. He said he didnt even want to take X-rays because he knew that our puppy needed stomach exploratory surgery to get the foreign bodied object out. They took him right away and thank gosh they did! He had an object causing an obstruction in his intestine and stomach also. They even showed us everything they took out. When they told us the price, I was so impressed! It was 1200.00 for surgery, bloodwork, fluids, a night stay, antibiotics and pain medicine. They were thorough and actually seemed like they loved animals. We took him to Middletown Veterinary Hospital and I will keep going there. Its crazy that for all that they did for our dog, it was the same amount as we paid for what they pretty much failed to do for us at VSD- since if it werent for Middletown, our dog might not have even made it. Its such a shame that doctors that are caring for our special pets that are like our family/children seem to only care about one thing.. Money! Definitely not going there again, thats for sure!!

Avoid this place at all costs. We took our dog in to have a tumor removed, and they gave us an estimate with the HIGH end of ~$5,000. That was supposed to cover the surgery PLUS 2 days of recovery. When we got there to pick the dog up the day after the surgery like we were supposed to, the doctor told us that it took "a little longer than expected" and that our bill was already over the HIGH estimate. Then he told us that he couldnt release her until she was eating so that she could take pain meds orally. We explained how she does much better at home, and that we would like to bring her home to see if she would eat for us there. He stated that sometimes he allows people to take their pets home for a trial and then if it doesnt work, they can bring them back. We stated wed like to do that but he pretty much ignored us. My wife went down the next day, and he gave her the same line... that she _couldnt_ take the dog home because she wasnt eating. I should also point out that every time we tried getting the dog to eat while we were there, they had just given her oxy, so her appetite would have been lower anyway. My wife tried going back down on the THIRD day, and he still said she couldnt bring the dog home, and that, oh.. by the way.. your bill is now ~$7800. It wasnt until I called and stated that I was coming down the next day, and I was leaving with my dog that he agreed. He had stated that he didnt want to release the dog, but that he would. We also found out that he was going on vacation that day, so who knows if someone else would have released the dog to us without his approval while he was gone for the next week. Also.. and this is a real kick in the pants. During one of the trips when my wife went down to try getting the dog, they needed meds for her... AND THEY SENT MY WIFE TO GET THEM! Serioiusly? They wanted us to bring our dog back to them so they could see her after surgery. Ill never step foot in this place again. 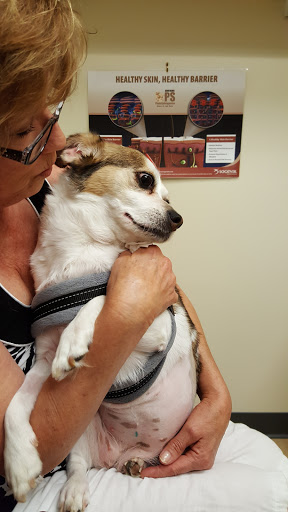