I have nothing but good things to say about All Pets. All three of my precocious terriers have had the occasion to need an emergency vet over the past 10 years, and we were lucky enough to find All Pets. In 2005, my Scottie, Goodie, was diagnosed with Autoimmune Hemolytic Anemia and Immune Mediated Thrombocytopenia by Dr. Itkin. By the time we got her to All Pets in the wee hours of a Sunday morning, her blood levels were so low that she had only hours to live. Dr. Itkin and his staff acted quickly to bring her from the brink of death back to a happy bouncing Scottie pup in a relatively short time. She had to be there for a week and a half and the fact that they were a 24hr vet helped me tremendously. When I couldn’t sleep at night because I was worrying about her, they were happy to receive me at all hours to let me hold my puppy. Over the years, Dr. Itkin continued to monitor our Goodie and spend time researching new therapies when the conventional treatments stopped working. He brought her back from certain doom once more when, for some unknown reason, her platelets counts began to tank. He worked to help us source more affordable alternatives when her usual drugs became prohibitively expensive. During the 10+ years that Goodie was Dr. Itkin’s patient, both of our terrier boys visited All Pets with copperhead bites. As per usual, the staff at All Pets took exceptional care of our crew. Our Cairn, Wembley, suffered extensive tissue damage from the venom, yet the All Pets team was able to minimize the impact, saving his leg. Earlier this summer, we visited All Pets office once again with our Goodie girl. She had developed a large tumor on her lip and Dr. Itkin carefully and compassionately counseled me on our options, helping us weigh the costs of treatment against realistically achievable results. We chose to remove the tumor for biopsy and she came home with the most beautiful sutures I’ve ever seen (Seriously, as a melanoma patient myself, I was extremely jealous!) Unfortunately, the biopsy came back as advanced lymphoma, and she had little time to live. Goodie has now passed and I just got off the phone from informing Dr. Itkin of her passing. She ultimately died from something completely unrelated to the complicated disorder from which Dr. Itkin rescued her so many years before. I will be forever grateful to him and the All Pets team who has taken care of my little furry family and ultimately granted me an extra decade with my beloved Scottie, Goodie.

STAY AWAY. Not only was Dr. Itkin rude and completely lacking in compassion; his incompetence would have killed our cat if we hadn’t gone elsewhere. The short version: All Pets took four days and $2300 to tell us our cat was going to die. Our second-opinion vet took twelve hours and $500 to diagnose, treat, and release her. She has recovered fully. We took our cat to All Pets for a swollen abdomen and lethargy. After three days of tests, Dr. Itkin told us she had carcinoma and was days away from death—there was nothing to do for her aside from treating her pain. We grew increasingly uncomfortable with Dr. Itkin’s professionalism and competence, or lack thereof, so we took our cat to UGA’s veterinary clinic, who told us she had a “textbook case” of uterine infection. They performed the standard surgery and sent her home the same day. It’s worth noting that UGA had to redo x-rays—at no cost because they were very understanding of our predicament—because the ones All Pets had done were unreadable. No wonder Dr. Itkin didn’t know what was wrong with our cat: his clinic couldn’t correctly perform standard procedures. They certainly knew how to charge for them, though. I should have known better. In contrast to the kindness of the women at the front desk, Dr. Itkin gave me the creeps from the very beginning, and it only got worse. The final straw was when he told my husband that, eh, he guessed they could perform surgery, but it would be “a bloody mess” (seriously) and probably wouldn’t do any good anyway. If he knew what he was doing, he would have known that surgery was exactly what she needed. When I went to pick her up to take her to the other vet, he gave me a hard time for not trusting his diagnosis. He spent the rest of that meeting telling me what to do when a cat dies. He oh-so-cheerfully informed me that, despite what people say, cats don’t actually mourn other cats; they actually just get confused, so… no big deal, I guess? My ailing cat was three feet away from us. Had I been less upset about the pain my cat was in and less eager to get the hell out of there, I would have given him a fine telling-off. NO. NO. NO.

We went to our regular vet because our Lulu was having severe pain, bloody stools and a 105 temperature. Our vet took x-rays and thought that Lulu may have swallowed something and immediately sent us over to All Pets. We saw Dr. Itkin, and what I remember most is his thorough exam of Lulu. Not only a physical exam but he wanted such specific information from us (when it started, how we held her, lifted her, where we thought the pain was). He took her back and felt like he needed to take better x-rays. When he was taking the x-rays he was able to settle her enough to palpate all over and found that he front legs appears to be sore. He decided to x-ray her legs and came back in and said that our Lulu had HOD (hypertrophy osteodystrophy). He was very thorough in his explanation of what it was and what needed to be done. He did keep her for the night to try and get her temperature down. A few things that stood out to me - 1. Tanya at the front desk was so super sweet and kind. 2. Tanyas sister - I cant remember her name was also so kind and just had a genuine love for animals and was so kind to Lulu. 3. The evening medical assistant - we called her maybe around 10pm to check on Lulu and she gave us an update. She told us that she unhooked Lulu from the cath to take her out but she didnt pee. We hung up and I called her back and of course Im feeling bad for my puppy and I asked her if she could take her out again, she always goes to the bathroom before bed and she did and called me back to let me know that she went. So sweet and made me feel so much better. 4. Dr. Itkin - so kind. Ill never forget him saying that he was so close to opening up her belly (just assuming something was in there causing all that blood) - but because he was so thorough he took a chance to x-ray again because of her symptoms and found a rare bone disease. He called us several times to check up on her. I just have felt so grateful to Dr. Itkin and all pets - I really feel like we still have our puppy because he was there that day!! Thanks again...we would definetly go back...however I really hope we dont have to!! :) Susan Stine and Lulu 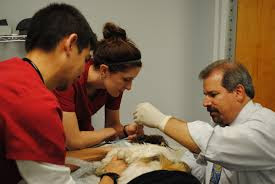