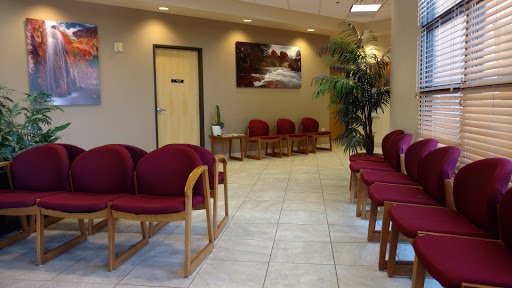 I seem to occasionally not be able to get prescription renewals accomplished. I end up calling my pharmacist and they will report to me that they have faxed renewal request multiple times to this doctors office and that I should call them to see what the hold up is. I then call my doctors office, and they will report to me that they never got the request(s). I go back and forth between both entities, with each telling me to contact the other. I keep doing this and seem to get little results. No one seems to actually bother to pick up the phone and actually speak to one and other. I end up trying to be the go-between for both parties. I am getting tired of this! This morning I had to do this again... Dr. Wades office reported they only (finally) received the renewal request this morning, even though Costco pharmacy has said they have faxed the renewal request multiple times this past week. Dr. Wades office said they faxed back to Costco. I called Costco, but they still have not received the request and therefore cannot fill it. I am pooped out being the go-between for both parties, and really cant seem to do any more. It looks like I wont be getting my prescription at any time in the near future... Here is my critique on the use of faxes: (One problem may be the antiquated use of fax machines to send these requests back and forth. Fax machines can get backed up with calls or sometimes drop them (this is a known issue as the fax queue/buffer can only handle so many calls. I wished they would move to an email-based system instead) I wished something could be done, but I seem to be at the mercy of their technology (wished they would just pick up the phone to talk amongst themselves)!

It took me 3 months to get my annual appointment with Dr. Padilla. I’ve been seeing her for over three years and she is the most unfriendly doctor I’ve ever had. The appointment was so rushed that I didn’t have an opportunity to discuss some main concerns I wanted to address. One of the things I did ask for was that my prescriptions be filled through mail order pharmacy as I do every single year. Dr. Padilla screwed up one prescription by only giving me a 45 day supply with 1 refill (I got to pay two co-pays for half a prescription). She has refused to correct the quantity of medication and make sure I have a one year refill. Her reason for not filling my prescription was because I got mad at her a few days after my appointment. I had called back with concerns that the UTI I had wasn’t getting better with the low dosage antibiotic she prescribed. Her response to my concern was so appallingly disrespectful and unprofessional that I’ve lost all trust in her and Desert View Family Medicine. During this conversation I told her I’d be finding a new family doctor as her inability to listen is not acceptable and I have zero confidence in her aptitude as a doctor. I am a business owner who doesn’t have time to visit doctor after doctor to get the healthcare I need. The fact I waited 3 months and not had my health concerns listened to or resolved during the appointment is unacceptable. Gilbert AZ is in desperate need of good, caring, professional doctors.

The weather has been hot here and the air quality can be even worse. I have asthma and find days like these difficult. I had lost my inhaler today which i have never done and needed it badly. The doctor on call(not my regular Doctor) literally yelled at me and asked me, "Why he should help me and why I didnt call before the holiday weekend and how dare I call him on a three day holiday weekend!" I replied,"Well because I didnt know I had lost my inhaler, your the doctor and its your job to help people! After a yelling match( or wheezing/yelling match on my part), I got the inhaler I needed to breath. I have been treated better working in tough Operating Rooms in Hospitals as a Vendor than as a patient calling in for help to my own doctors office. I will be leaving the practice after being there 7 years because though I like my doctor, I cannot risk being stuck having to need help again with the other doctor on call. The name of the practice is Desert View Family Medicine, Gilbert, AZ ,FYI. I will also be reporting this physician as he behavior is unacceptable and I cant imagine what would happen to people who could not stick up for themselves.

MONEY HUNGRY....Im very disappointed...came to the practice on a recommendation and saw dr lauber once and from there he was apparently my assigned to doctor. Never saw him again after that he left the practice. when I needed a referral they wouldnt let me see the nurse practitioner that I normally see and said that I had to get established with a new doctor even though I was there about four months prior. I saw dr. Combs who apparently is one of the owners he was very rude when it came to my referral request and when I asked about renewing my prescription he said thats not why I was there and dismissed my request for refilling my blood thinner. Now when I have called to get a refill on my medication they are once again saying I need to get established with another doctor; when I was just there to do that exact same thing just a few months ago. I feel like they continually force me to go in to get more money. If Im going to pay yet another copay I will not be going somewhere else.

If you go to this facility avoid Dr. Caleb Lauber. My experience at my first visit was that I simply pointed out that I had been scheduled for another procedure that day, not the one he insisted on giving me. Politely, but firmly pointing out the error in the scheduling to him he decided this was "Breakdown in Doctor/Patient relationship". In other words, the patients fault his staff mischeduled me. He took it so personally that his staff had made a mistake he actually dropped me as a patient. The maturity level of a child, clearly incompetent at communication, doesnt listen, and also makes many medical mistakes as far as I was able to tell during the examination process. Nice facility otherwise, though hard to find as there are two buildings with the number on the property. P.S. I dont tolerate this kind of incompetence so I will be filing a complaint with the state medical board. If anyone wants to join me in a lawsuit let me know.

I went to Dr. Lauber for a specific condition. I was sent for bloodwork and tests, and before I received any contact from DVFM, I was referred as prediabetic to a clinic for classes. This diagnosis was unrelated to what I presented with. When I was called with my results (Not by Dr. Lauber, I had no chance to discuss the results with him), I was told that I needed to switch to a high fiber/bulk diet and avoid fried foods for cholesterol, and start exercising at least 3 days a week. This was despite the history I gave where I detailed an average of 10-14 hours a week (4-6 days) of vigorous exercise (triathlon and martial arts). There was also no mention of anything related to the original condition that I went in to be seen for. This clinic gives all the appearances of being a billing mill uninterested in the patient beyond their copay.