I absolutely adore this Banfield location, and Dr. D in particular. She never hesitates to take the time to talk to me exactly about what is going on with our zoo of critters, and one evening when I came in late to pick up the dogs, she actually let me hang out in the back with her and the staff to calm my one dog down since he had been ornery all day. Dr. D. and I have so much stuff in common its more like were friends than a professional relationship, and thats something that I value. She is the only doctor I will see there since I didnt particularly care for one of the male vets that was there (our big dog snapped at him and he generally never does that, plus his accent is very thick and hard to understand). I know they have another new male vet on staff who I would be willing to try if Dr. D. wasnt available. Every time I bring one of our animals in, the techs and the front desk staff are always full of smiles and the dogs are always happy to see them (the cat is not, but then again the cat hates riding in his carrier and has turned into Satan on the car ride over). I have never had a problem booking an appointment for the animals (we always do the drop off with the late pick up), and they have never given us flak over wanting to get some of the pet medications through Target or Walgreens or Costco since its cheaper than buying them there. I dont feel like I am having products forced on me like I have at the previous two banfield locations we used to take our animals to, and that makes it so much easier for everyone involved. If you have the insurance like we do, you get your two free comprehensive check ups per year (including lab work) and one dental cleaning plus 15% off of medications and prescription diet food. You also never get charged the $49.95 office visit fee so you can bring them as many times as you want. You cant beat that with a stick (nor should you, since beating things leads to fear and fear leads to hatred). I cant give enough stars for this place. I love it enough that if they ever had an opening for part time help Id willingly turn in a resume and work there for peanuts so that I could enjoy the animals and the staff. I can say with 1 million billion gazillion percent authority that I will never take my animals anywhere else.

STAY AWAY!! We went back to this office after moving back to VA (after 5 yrs in CA). We had taken our first dog to this Banfield from 2003 to 2005. I took both of my dogs for separate appointments. The older dog has had seasonal allergies for all 8 yrs of his life. This office has treated him for the allergies and I had his records faxed in from CA. They gave him a shot. Two weeks later I took him back as the symptoms were back. First, they had the wrong reason for the visit listed on the paper. Then the dr made him yelp while taking an ear swab. Then he told me my dog had never had a shot at the previous visit. He was looking at the wrong dogs profile. He proceeded to argue about the type of shot my dog got in CA (as it got him through the allergy season but the Banfield dr claims that isnt possible). He told me the shot they gave him only worked FOR A WEEK! Why give a dog who suffers from severe seasonal allergies a shot that will only work for one week? (Greed?) He wanted to run tests to see if my dog had mites. He then said they couldnt give him the more effective pill without blood tests. When I told him I was taking my dog elsewhere he ignored me and tried to keep treating him. When I took my you get dog to the office two weeks ago they cleaned his ears and anal gland. When I got him home he screamed every time we touched his neck/chest. I know they had to restrain him but I dont like him being hurt. I took my "allergy dog" to Colonial Animal Hospital in Springfield and they were awesome. I feel Banfield is a rip off who rips off us pet parents.

I went to Banfield to get treatment for Kennel Cough and I was given a prescription for pills, when eight different pharmacies told me it is not possible, that the drug only came in syrup. When I called Banfield, the doctor was not available to correct this error for days. I had to drive back in and insist on a new prescription from a different doctor, which they did do. Clearly our first prescribing doctor is not aware of what she is doing. My dog needlessly suffered. I also informed the Banfield doctor that my dog had not eaten for two days. She said not to worry that she will start eating once the antibiotic and medication started working, that there was nothing she could do about this. Well, two days later we had to take our dog to the emergency vet, where we had to choose what would be the most humane thing to do for our animal who could not breathe and was not eating. (BTW, ER doctor, nurse and admin tech all asked separately if my dog had a chest xray at Banfield, and the doctor stated that she should have had one for a proper diagnosis). I do not think the Banfield vet took my observations of my dog seriously and I am extremely disappointed and angry with my level of care. I am writing this because I chose Banfield due to the cost, it is often cheaper. Well, I want to warn you: you get what you pay for. I terribly regret EVER having taken my dog to this treatment facility. Pay extra and go to an experienced vet doctor. I hope that you learn from our mistake. Our dog will forever hold a special place in our hearts.

This vet seems to be more oriented towards dogs than cats. My cat was always very docile at her previous vet until one day at Banfield the technicians took her back to get a urine sample and I heard this horrible screaming, sounded like a cat was being torn apart, and they brought my cat back saying that she had gotten upset at another cats screaming, and they couldnt get a sample. Ever since then my cat has been nearly impossible to handle at other vets. I suspect that the screaming I heard actually came from my cat based on her behavior after that visit. I really liked Banfields health insurance plan, but now I cant take my cat there anymore and I have to keep paying money every month until my policy ends (or pay for services rendered, which would be more expensive). It seemed like the perfect place, adjoining PetSmart, convenient location, health plan, etc., but now I cant take my cat there anymore because as vicious as her behavior is at other vets, she is even worse at Banfield.

YUCK! Look for a different vet or a different Banfield. I will say that I do like the vets at this Banfield but the scheduling, information received about how to prep pets for a visit and then getting things done timely is TERRIBLE. Ive had to take my dog in twice for an 8 hour test, the first time forgot she was in the office and didnt remember until too late. The second time, they didnt start the test until 11 so I couldnt pick up until 7pm, despite my asking them to make sure they started on time to get her out around 5 or 6 at the latest. Also had to take her for another test only to find out they forgot she needed to fast and have taken her medication a minimum of 4 hours before, despite the fact they told me when to give her the medication and they setup the appontment time. If I could switch vets now I would. Defintely will next year after my pet plan expires! 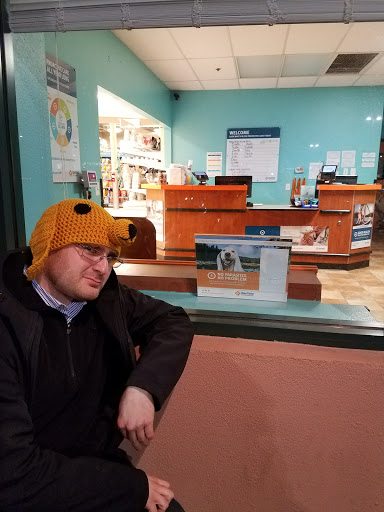 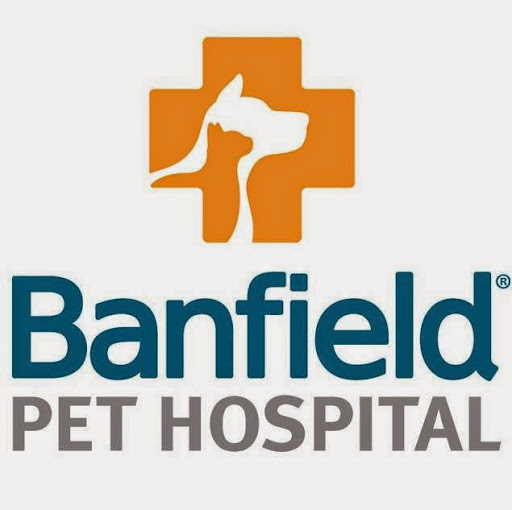 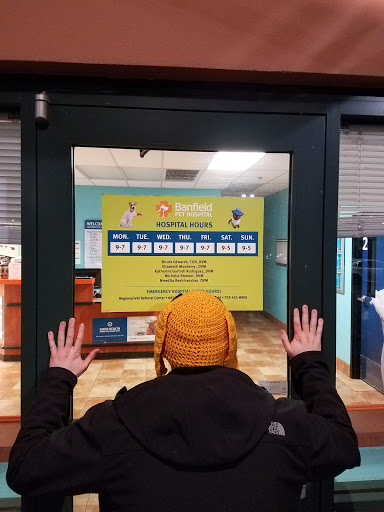