Reiterating what I wrote on Yelp...People should know how heinous this place is. Update: I waited a bit before writing this to be a bit more level headed, but honestly I still feel very upset about the situation. Update to situation, which occurred December 2016: Biscuit had a reaction to where the staple was left in him. I called the corporate office and was contacted by Jennifer Holm, who Im assuming is the East Coast representative of the company. I received a call from her after two weeks of telling them about the situation (I had to re-call to make sure they received my phone call). She was incredibly kind and promised a free exam and a biopsy (I INSISTED biopsy when I was on the phone with her). She obliged and said that would be no problem. Unfortunately, something came up and I had to cancel my appointment. It was getting close to the end of the semester and I was overwhelmed by work and school responsibilities, and was to head home back to California shortly after that. I ended up making the appointment again for when I returned in January, and because I had to reschedule, they said that I wasnt worried about it at all as I cancelled my appointment. I didnt realize life couldnt get in the way, and that totally nullified everything. We tried contacting Jennifer Holm to verify that everything would be paid for when I arrived at my appointment, but she was not available. I assured the veterinarian though that I was positive she would pay for the costs (the exam and biopsy - since again, it was their fault). I was certain that Dr. Holm would stay true to her word, and went on with the biopsy because I trusted her. As a gesture on my end, I offered to pay the ~$200 up front as I was certain Dr. Holm would reimburse me after she contacted the clinic and stick with what we discussed. I wish I had recorded the initial phone call. Dr. Holm ended up calling me later claiming I clearly was not worried about my dog because I did not go to the original appointment. She then told me she was not going to pay for it because of this disclaimer and hung up on me. To note, this disclaimer was not mentioned at any point during the initial phone calls. Not only is Blue Pearl reckless, but they dont seem to understand that people sometimes have to cancel appointments when life gets in the way. As other reviews have shown, it seems this place only cares about the money. First Review: I was referred here for a surgical removal of a tumor for my elderly dog, Biscuit. After leaving Biscuit there a couple days post-surgery along with a check-up a week later to remove his sutures, I noticed a surgical staple left in on his abdomen. Considering the surgery cost $5,000+, I expected them to do everything 110% right. This was a big mistake on their part. I complained with the manager on call that day, and demanded to determine if there was some sort of monetary rectification they could do because of this. She mentioned I would definitely, 100% get a call on Monday to discuss this, agreeing that this was something that was not permissible. The veterinarian overseeing the surgery called a couple days later and apologized profusely through a voice message, claiming it was a big mistake on her part. When Monday rolled around, the manager belittled the situation and called it an oversight. They didnt think I deserved any sort of refund, and I was making a big deal out of it. I should also note that I had to pick up the phone and call them. They totally forgot about my case. Im a medical student, and if I would leave any sort of surgical staples in my patient in the future, Im sure I would not hear the end of it from my boss, or from the patient that would be suing me. If you dont want surgical staples carelessly left in your pet, dont go here.

Our vet of over 10 years referred us to Bluepearl to get an ultrasound on our dog. While she would have liked to have our dog seen by the internist who specializes in this service, told us we would have to wait weeks for an appt. Her office called Bluepearl for us instructed us to go to Bluepearl directly from her office on the Saturday of Memorial Day weekend and go through their emergency department . Our vet informed us that they would have someone on call to do the ultrasound. After meeting with the Bluepearl vet in duty, it was very clear that she didnt feel that the test our vet requested was important enough to call the tech in on a holiday weekend. (Despite the instruction from our vet who has been treating our dog since we got him 5 years ago as a pup.) While our vet had just been rehydrated him 30 minutes before he arrived at Bluepearl, our vet also provided us with copies of x rays and blood work her office had just completed thst morming. The Bluepearl vet wanted to rehydrate him again, even after she said "that previous treatment hadnt made it into his system yet." Of course she wanted to do more blood work to have sent out. She would prefer not to call the person in to so the ultrasound, but rather keep our dog overnight for observation. Remember we referred here simply for an ultrasound. The Bluepearl vet did tell us if we would take our dog home Saturday bought him back on Tuesday we would be recharged another $100 examination fee. This has us baffled as they didnt do anything to try to treat our dog that day. After waiting over an hour and no response from their ultrasound tech to return their call from their office, we left. We really wonder if that person was ever even called, or more importantly what if our dog was in dire straits Bluepearl probably not properly staffed to help him. Our vet called us that very same Saturday afternoon to see how things went and was very disappointed that Blue Pearl didnt inform her office they would not have one on call over the weekend to conduct the ultrasound test. Our opinion, Blue Pearl is more concerned with taking advantage of a situation and running up bills than treating pets. Complete waste of time and money. 6/9/17 Response to owner.. Dear Kathy L. While I appreciate your response, the fact of the matter was our vet referred us to Bluepearl for a specific test. Our vet called your location before we left her office and was NOT informed no one was available to conduct the test. When we arrived, we explained the situation and were not told that Bluepearl was not properly staffed that day to do the test. Rather we left without having that test completed and a $100 poorer. We were also told, if we came back on Tuesday, or after the holiday,, we would be charged another $100 before having the test. (Despite offering "emergency" service, it appears, Bluepearl does not believe animals can get sick on weekends or holidays.) If Bluepearl really wanted to discuss and resolve the situation, they would have called us rather than responding a week later providing their phone number telling us to call. Stand by my previous comment. Complete waste of time and money.

I have had 2 experiences with this Vet Office, the first was so-so, but the 2nd was just amazing, considering we were there for our elderly (14) dogs euthanasia. We called ahead on a Saturday (Holiday weekend) to let them know when wed be there, but were still an hour later than expected. The staff was completely understanding about our lateness and extremely kind and gentle with us, as well as with our dog. She could no longer walk on her own, arthritis in her spine and legs kept her in pain if she tried to move much, so they came out to our car and put her on a gurney with wheels. The exam rooms are small and since there were so many in our family wanting to be with her til the end, they very kindly and generously laid a blanket under the pine trees in back for us to spend AS MUCH time as we needed with her. It was a beautiful day, very peaceful setting...we fed her treats and gave her lots of love for a LONG time. The vet (Im sorry I cant remember her name, the small details are a blur) was so nice, very kind. I believe we could have stayed out there until it was dark, and they would have understood! All in all, it was so emotionally draining to make this difficult decision, and they made every effort possible to ease our pain as best they could. There is a younger woman working here that makes a plaster paw print for the families losing a dearly loved pet, out of her own time/materials, just because she wants to. I was incredibly moved by that gesture. Afterwards, we received a lovely card in the mail, with a hand-written message from all of the staff we had contact with, including the vet. As I write about that day and our experience, I get choked up from missing my baby so much. Im thankful to them all for supporting my family throughout this entire process. 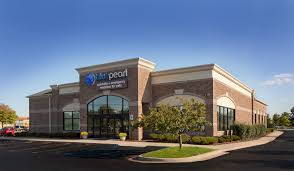